Twisty Cone was built by Don and MaryAnn Tharp in 1982. 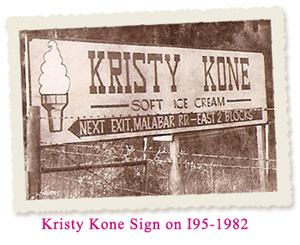 They originally called it Kristy Kone, named after an Arkansas ice cream stand they used to frequent as a young couple. The Tharps had moved here from Michigan in 1978 intending to semi-retire after selling their sand and gravel business up north. But they saw a need and an opportunity in the quiet suburb of Melbourne that didn't have many businesses and fewer restaurants. In the early 1980's, Kristy Kone was surrounded by empty land and very little car traffic traveled Malabar Road from the only 20,000 or so Palm Bay residents. The days were slow, but at night the cars would come and the lines stretched to the street for hours. Palm Bay had been introduced to the Tharp family and loved the treats they were serving. 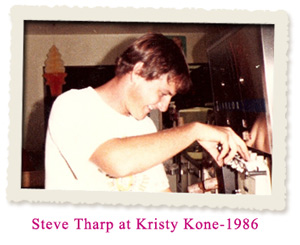 Mr. and Mrs. Tharp worked the business along with their teenage son Steve and it kept growing. Don and Maryann always had a smile, handshake or a quick laugh at the ready for their customers.

Don Tharp quickly gained a reputation as a funny character who loved to banter and win people over with his Arkansas drawl. They hired and trained many Palm Bay teenagers to work the windows - expecting them to be quick and friendly. Michelle Tharp (then Michelle Hill), worked at the shop the first summer it opened in 1982. She later returned to work there a few summers home from college. That was when she

met and started to date her future husband, Steve Tharp.

After 5 years, in 1987, Don and Maryann decided to lease the ice cream shop to a couple from Ohio so they could build a new business next door, Tharp's Tire Store (now Tharp's Complete Auto Repair & Transmission). They retained ownership of the building and land throughout. The Ohio couple ran the business until 1996 when they decided to leave.

At this time Steve & Michelle Tharp, now married, accepted the older Tharps' suggestion to give the business a go. They gutted the building, changed the name and basically started from scratch. They launched with a bang in August 1996, giving away free ice cream cones for two weeks. They worked 12-16 hour days, seven days a week for months and months. They hired 2-3 employees and then slowly added more until Steve could finally go back to work at Tharp's auto repair business next door.

The business continued to grow as Palm Bay residents came back time and again for the Tharp Philosophy of Business....great ice cream, good prices and friendly faces who remember the "regulars".

Since 1982, Twisty Cone or "Tcone" has grown into the shop you visit today. Our recipe for success includes updating our menu while keeping all the treats our customers have enjoyed for 38 years. We are open 362 days a year only closing Thanksgiving, Christmas Eve and Christmas Day. We truly take pride in our shop and our staff is the best! Every Twisty Cone team member is trained in the "Three C's", Cleanliness, Consistency and of course Customer Service! We know our customers are visiting us for a "treat" and want them to leave happy and satisfied.